The final round of the OHA Motorsport Summer Series took place in mixed conditions but it didn’t discourage 45 riders from tackling the challenging course.
As the deciding round of the Series, it was a winner takes all situation in almost all of the grades.

In the Clubman class 4 riders had a chance of taking top spot in the series. Desy Leckey had a 6 point advantage over Jamie Chambers with  Terry McKee only 1 behind that and Alex Dugan a further 3 adrift.  In the end it was Desy Leckey, who managed to clean 30 of the 32 sections in the increasingly slippy conditions, who took victory from Will Corry and with it the series title.  Will was making his first appearance in the series and put together a very consistent performance of just 4 single dabs. 3rd place went to Jamie Chambers on 6 marks with Phillip McClurg 4th and Alex Dugan 5th. Unfortunately, series contender, Terry McKee had to retire at the half way stage with a front puncture.

Youth A was another tight affair with Ross Allen and Stuart Lappin tied on 20 points going into the final round. On the night it was Ross Allen who stepped up with a superb ride for just 4 marks which would have been good enough for top spot in the Clubman class. Ross also took the series win with 2 wins from 2 starts.

Youth B saw Mason Crawford do the opposite of almost every one else and improve his lap scores as the conditions got worse to finish on a total of 36.

The Sportsman class was even tighter with 5 points covering the first 3.  Andy Higgins led from Geordie Robinson and Gareth Jones in 3rd spot.  After the first lap there was just 1 mark separating the 3 contenders but unfortunately a disastrous 2nd lap from Andy Higgins all but ruled him out of contention.  Geordie Robinson held it together, despite a late 5, to take victory, and the series, from a very impressive Eddie Page in only his 3rd trial. Gareth Jones held on to take 3rd place and with that secured runner up spot in the standings.

In Youth C Sophie Ferguson had the ride of the night to drop only 4 marks, easily good enough to win the Sportsman class.  She was followed home by Alex Andrews on 18. Sophie took wins at all 3 rounds to finish on a maximum 60 points.

In the Novice class Lee Stevenson took the victory on 4 marks with Christy Joss, all the way from Cork, taking second place on 17.
The win was enough to give Lee joint first place in the standings with Eddie Page.

Youth D saw Ollie Reid take the win on 21, his second win in the series was enough to claim the D class title. 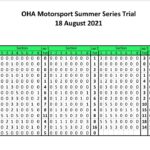 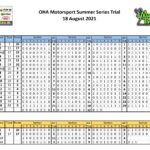 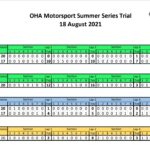